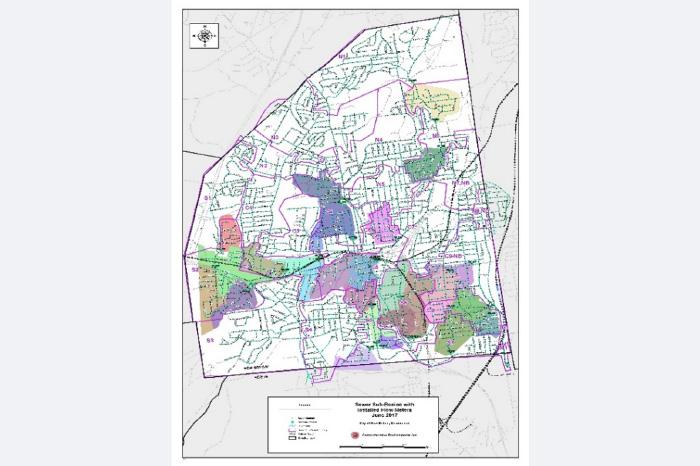 The City is under an administrative order issued by EPA on December 22, 2015 to develop, among other procedures, a detailed long term I&I control plan. Our sub consultant CDM Smith has developed very effective programs to identify and remove excessive I/I.  An important part of these programs is identifying the baseline condition and measuring progress and success against this baseline.  Flow monitoring is used to develop the baseline condition and track success toward the goal.  The approach has been to focus continuous monitoring in smaller tributary areas, generally containing up to 10,000 linear feet of sewer.  The small areas are identified by reviewing existing metering and I/I data.  Metering is then performed in these smaller areas to quantify peak I/I, identify removable I/I, and measure resulting removal.  This type of program was implemented in the highest priority area in the City with known bypasses such as exists in area C-9.

The CEI/CDMSmith performed an I&I analysis and determined that extraneous flows are from public or private sources. A subsequent rehabilitation contract was developed that provided for the disconnection of 30 private sources, rehabilitation of all manholes and the CIPP lining of all pipelines that exhibited excess flows over standard limits.

Subsequent to implementation of the rehabilitation effort it was determined that a City-wide approach for I&I removal would need to be implemented in order to meet the overall goal of reducing peak flows to approximately 21MGD. Peak flows in the past have been as high as 40MGD. The annual average flow varies between 10 to 13 MGD. This City-wide analysis provides the City ability to rank those new areas versus the data obtained in the C9 area.

CEI utilized its extensive historical knowledge of the City’s sanitary system and worked with CDMSmith to determine future watersheds for micro metering. These areas were based on previous data, pipe age and other information available to the team.

The program that was implemented over spring of 2017 and spring of 2018 due to limited rainfall events in 2017 and early 2018. The metering period consisted of 15 weeks over the two-year period. 29 meters were installed throughout the City and one meter was installed at the Master Meter between the City and the Mattabassett District to assess overall flows to the WWTF.

The study analysis was completed in June of 2019 and provided the ranking of the 29-meter watersheds and the 3 remaining watersheds from area C9. The report provides the path forward for compliance with the CMOM AOC.