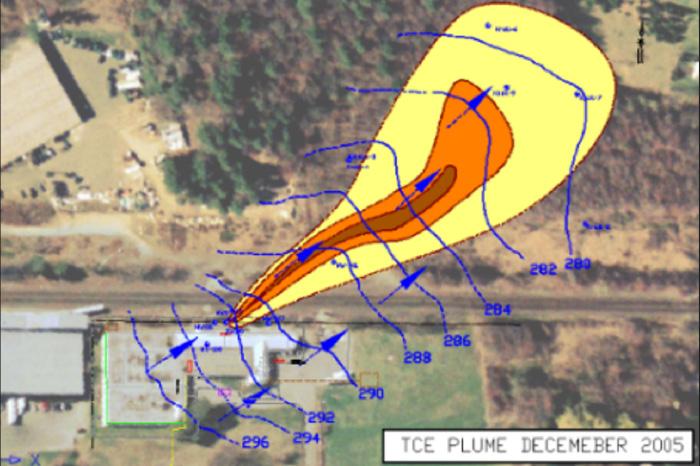 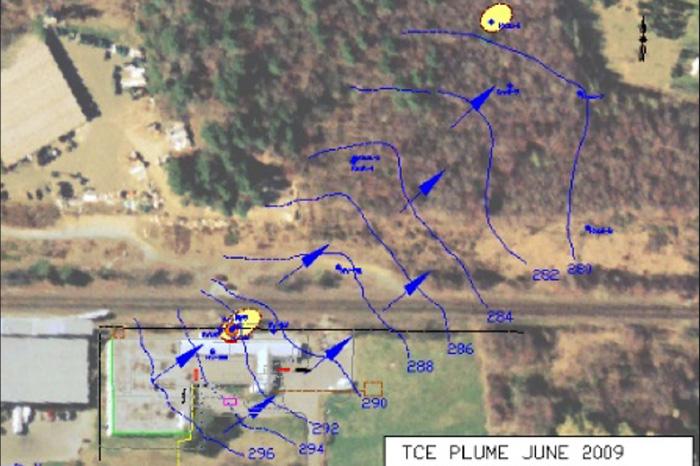 A metal processing facility in Westborough, MA had a historical release of trichloroethylene (TCE), which formed a dense non-aqueous phase liquid (DNAPL) and dissolved phase TCE plume. The site was initially listed by MassDEP in 1993 and then closed in 2005, however, a subsequent MassDEP Audit showed that source control had not been accomplished. The release impacted soil and groundwater at the site and produced an expanding dissolved phase TCE plume that covered an area of approximately 50 acres and migrating into a Zone II Drinking Water Aquifer. CEI was retained in 2008 to remedy the issues and develop a permanent remedial solution. CEI started a progression of chemical oxidation injections to treat the offsite dissolved plume and control the source. CEI identified a secondary source area with evidence of DNAPL. From this, our team developed several pilot programs to assess the most cost-effective method to remediate this large site. Variables included the type of insitu chemical oxidation to be used; how to treat the residual TCE in the vadose zone soils, how to control the primary source of the dissolved TCE plume migrating off site, and eventually how to treat the DNAPL source. The initial onsite pilot program provided for grid point pressure injection of sulfuric acid (H2SO4), iron sulfate (FeSO4) and hydrogen peroxide (H2O2), also known as Fenton’s Reagent. Based on the Standard Operations Procedures (SOP) and Quality Assurance Project Plan (QAPP) continuous monitoring was conducted to regulate the chemical feed rate. The peroxide treatment proved effective for the vadose zone soils and onsite shallow groundwater, but had a reduced effective radius for the bedrock DNAPL with limited persistence for treatment of the offsite dissolved plume. As a result, the program was modified to use potassium permanganate (KMnO4) a long-lasting highly mobile oxidant that is regularly used in potable water treatment facilities. By alternating chemical delivery to the onsite deep bedrock wells and the corresponding shallow cluster wells, the fence line delivery system controlled further off-site migration of the dissolved plume.

With agency approval of the Remedial Design/Remedial Action, the KMnO4 program was extended to treat the large off-site dissolved plume in both the bedrock and shallow groundwater across undeveloped terrain with limited available access. The goal was to reduce the mass and break up the plume. Using existing monitoring wells, the KMnO4 delivery was designed to match groundwater flow rates. Approximately 6,600 gallons of KMnO4 at 4% solution was delivered to various points in the aquifer to address specific pathways of migration.  Current data shows that the overall mass of the off-site plume has been significantly reduced and the need for continued off-site treatment has been eliminated as shown by four consecutive quarters of groundwater samples meeting regulatory standards offsite. The offsite wells have been decommissioned in favor of a new compliance point located 225 feet downgradient in an area with the highest historical TCE concentrations. In an effort to eliminate the DNAPL Source Area, a third stronger oxidant, sodium persulfate (Na2S2O8), with chelated iron has been used most recently.